I got to present at this year's Chicago Coder Conference, about static site generators and the "JAM stack." This is a talk I've been doing variations of here and there for about six months. It was the first time I've been lucky enough to present at a conference.

I had a great time! I was a bit disheartened by the fact that I'd been time-slotted up against Uncle Bob, and I even told everyone I met the first day of the conference that they should go listen to him instead of me. It was an honor to be speaking at the same venue as him, he is an amazing speaker and a role model for me. I just wish I hadn't had to compete with him for listeners....

Still, I had about 15 people come hang out and listen to me. I had great conversation with several of them before and after my talk. I've been going into these things with the thought that if I get two people to legitimately listen to what I have to say, and I can legitimately help them, it is a win. In this case, I think I definitely met that goal, and I am pretty hungry to speak again soon.

As much as I hate taking selfies, I did convince myself to take one on my way out of town. The squatty looking building in the background, the Gleacher Center, is where I spoke. 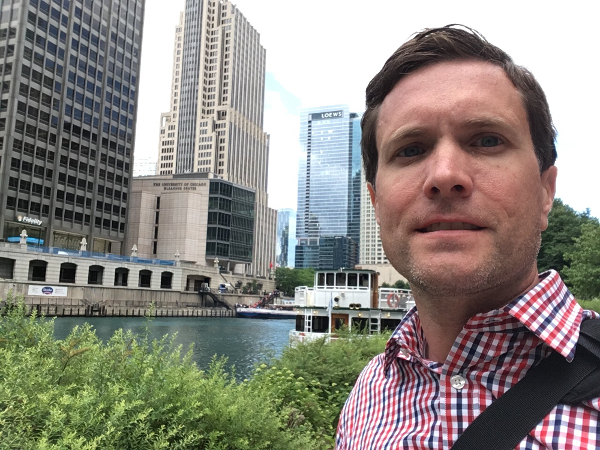